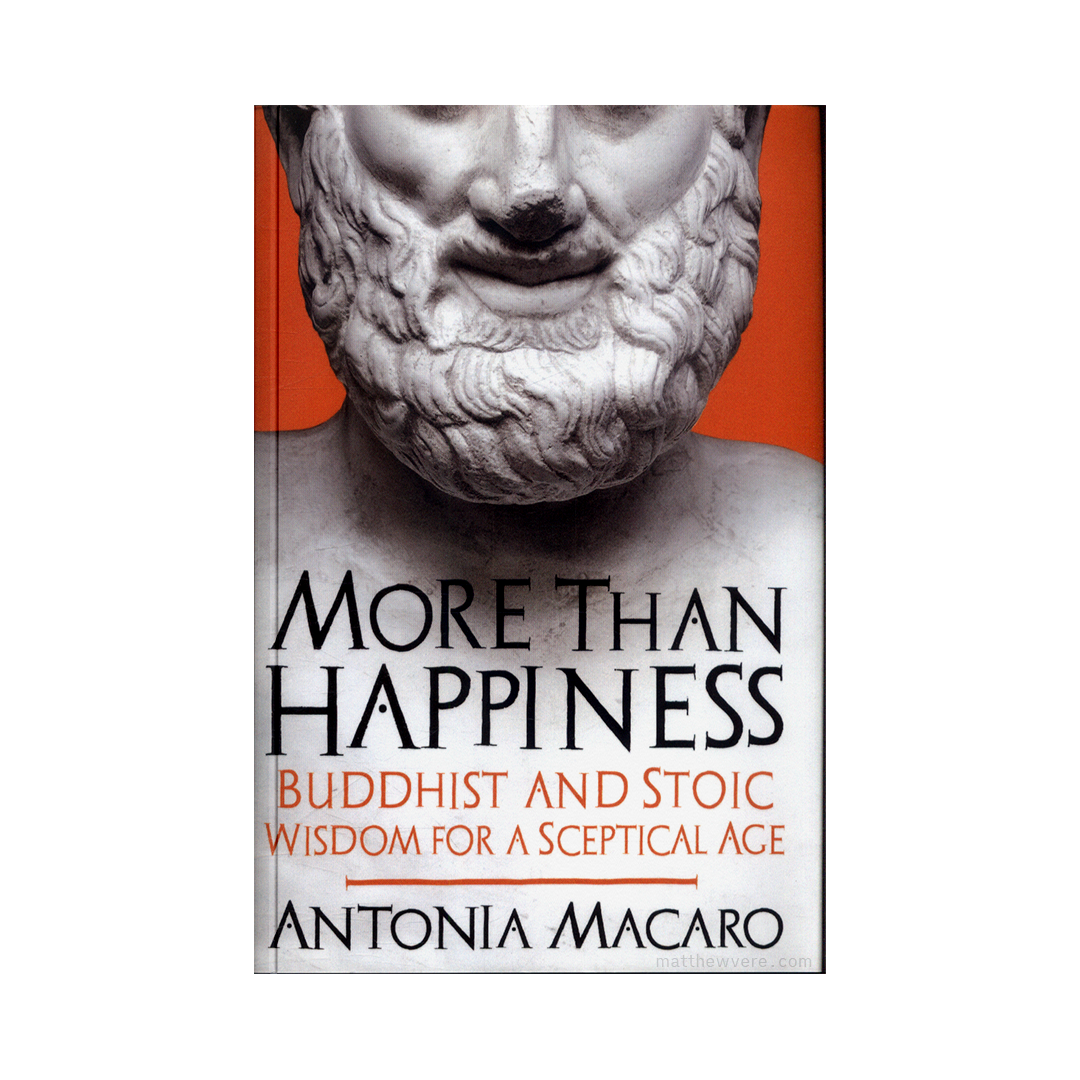 Note: The following are excerpts from More Than Happiness: Buddhist and Stoic Wisdom for a Sceptical Age by Antonia Macaro.

Our sense that we are a self authoring our actions and persisting through time is a wrong view in Buddhism. It is a kind of delusion that originates in failing to see that ‘self’ is only a label referring to a collection of shifting phenomena. Our experience of ‘self’ in fact breaks down into five main mental and physical components, or aggregates. These are: bodily phenomena; feelings; cognitions; volitional activities; and consciousness.

It’s not too difficult to come to share this or a similar analysis. It is undeniable after all that if we ‘look inside’ we become aware of different experiences but consistently fail to encounter a ‘self’. As many have remarked, when we start paying close attention, the self just vanishes. This challenge to the conventional perception of a discrete self inhabiting our brain, thinking our thoughts and feeling our feelings, resonates with modern scientific views that there is no one centre of consciousness or control in the brain.

For instance, Kurzban’s theory describes the human mind as made up of lots of separate, interacting ‘modules’ – little ‘selves’, in a way, colourfully likened to iPhone apps. Modules, or ‘sub-selves’, each process different kinds of information and perform specific functions. (They needn’t have any particular spatial location in the brain.) They evolved for different purposes, therefore have different priorities. Sometimes they chime, sometimes they are at odds or in competition with each other. At times one is in charge, at times another. This is why we are so complicated, plagued by so many contradictions. A lot of these conflicts are between ‘impatient’ modules and those with an eye on the future: one module wants to eat ice-cream now, another is more interested in long-term health, and reconciling them can be difficult.

Whether or not we choose to use the language of modules, nowadays most psychologists and neuroscientists would support the view that the mind is fragmented and breaks down into subroutines with different functions. There is no place in the brain where conscious experience comes together. Instead, all kinds of mental activity happen in parallel: some of it will become conscious and some won’t; some will leave traces and some won’t. The sense of having a unified self is created by the mind concocting a coherent story in which all these processes belong to the same ‘I’.

What are the main mechanisms that make change possible? As humans, we can improve ourselves because we have the ability to monitor our initial (faulty) responses to things and then withdraw our (faulty) attributions of value and/or challenge our (faulty) priorities. First we monitor, then we make changes.

In Buddhism, what we need to monitor is how contact with an object immediately produces a positive, negative or neutral ‘feeling’ (vedanā) – a basic reaction, which precedes anything we could call an emotion and is quickly followed by craving and clinging. Feelings constantly arise and cease in response to what we encounter. Like the ‘winds blow in the sky … so too, various feelings arise in this body: pleasant feeling arises, painful feeling arises, neutral feeling arises.’

Learning to catch these feelings as they appear is a really important part of the Buddhist training. Normally they tend to slip by, and as a result unwholesome states like greed and aversion quickly pile up. Before we know it there is a whole baroque structure – a ‘mental proliferation’ – of thoughts and emotions, and emotions about emotions, to contend with. It all starts with a simple moment, a primitive apprehension of something we are experiencing as good or bad, which we’re not aware of unless we learn to pay attention to it. But even without properly entering our awareness this has the power to colour our thoughts and direct our actions. For instance, most of us have had the experience of meeting someone who ‘presses the wrong button’ for us, for reasons we don’t understand. If we don’t pick up on this ripple in our experience we might end up feeling suspicious and hostile, or otherwise acting out what the button has activated. But if we become more skilled at noticing that the button has been hit in the first place, we can cancel the activation. By training ourselves to spot the fluctuations of embryonic likes and dislikes as they come and go we can avoid being pushed around by them.

According to the Stoics too, we are constantly receiving ‘impressions’ about the state of the world and of ourselves in it. What these misleadingly tell us is that things outside our control are good or bad and we should pursue or avoid them. As they put it, we tend to automatically ‘assent’ to these impressions, which means that we believe them (this belief is implicated in emotion) and are likely to act on them. But while animals and young children have no choice but to respond directly with action, adult human beings are in the fortunate position of being capable of suspending judgement if they have reason to think that the impression is not truthful. The Stoics thought that we can and should learn to question and withdraw assent from such impressions. It can happen, however, that even a sage is momentarily affected by an appearance, without having assented to an incorrect impression. Given that we know the sage cannot experience bad emotions, this anomaly was explained through the idea of ‘first movements’: immediate, kind-of-physiological reactions that did not involve assent, so were not beliefs, or emotions, or connected with action.

This point was made through the story of a Stoic philosopher on a sea voyage, who during a violent storm showed every sign of being as frightened as everyone else. Does this mean he was assenting to the faulty judgement that something terrible was happening (that life is a good and losing it bad, for instance, which would be against Stoic philosophy)? It seems not. When the philosopher was subsequently asked how his reaction fitted in with his convictions, he explained, citing Epictetus, that occasionally external impressions are too quick for us to withdraw our assent immediately.

‘Turning pale, shedding tears, the first stirrings of sexual arousal, a deep sigh, a suddenly sharpened glance, anything along these lines: whoever reckons them a clear token of passion and a sign of the mind’s engagement is just mistaken and fails to understand that they’re involuntary bodily movements.’

One of the most quoted Stoic sayings must surely be Epictetus’:

‘People are disturbed not by things, but by the views they take of things.’

It is certainly good advice to examine our thinking about all kinds of things. We should indeed question our views and interpretations of events. It would be helpful to get into the habit of asking ourselves questions like: am I right to think this? What is my evidence for it? Are there better alternative explanations? Should I suspend judgement on this one? But the particular kind of questioning Epictetus had in mind was about whether things are in our power or not. If not, we should drop our concern for them. We’ve seen why it’s more complicated than that. First of all there is no neat division between what we can and what we can’t control. Rather there is a spectrum, from things we can’t control at all to those over which we have some influence. But the spectrum stops here, as there is nothing over which we have complete control.

At one end of the spectrum, indisputably we have no control over the past, although it is amazing how many hours we are able to spend replaying in our head some situation that we wish had turned out differently, almost as if by doing that the outcome might actually change. Equally indisputably, we are powerless over our ultimate date with death. At the other end is the sphere of choice. We now know it’s not the case that this is wholly in our power, as Epictetus believed. Nonetheless, there is some scope for changing our views and attitudes, although in view of the large unconscious input the difficulty of the task should not be underestimated.

Most things fall within a grey area. We have a certain amount of control over the course of our life. We can do things that are likely to be beneficial for our health, for instance, although we should combat the wishful thinking that if we go to the gym and adopt the right diet we can stave off all illnesses and live well into our hundreds. We can increase our chances of getting a job if we make sure we prepare for the interview. But can we change other people? Can we change our talents and inclinations? The answer is probably either not at all or only to a very limited degree, depending on the circumstances and how we go about it.

Once we have done all we can, in relation to our health, a job, or anything else, we should accept that outcomes in the world are due to many different factors that are not up to us, and let go of our fantasies of control. We may get ill despite our healthy diet and exercise, and we may not get the job even though we’re well-qualified and prepared. For this reason we should avoid making our well-being entirely dependent on things turning out as we’d prefer. If something is very important we may want to leave no stone unturned. But if it looks like things are just not going to work out, we should accept it, because the bottom line is we can’t do anything about it. There is a fine line between trying our best and not only wasting time but also tormenting ourselves and others fighting against things that can’t be changed.

A modified version of Chrysippus’ questions might be useful. He asked:

‘Is there good or bad at hand? Is it appropriate to react?’ 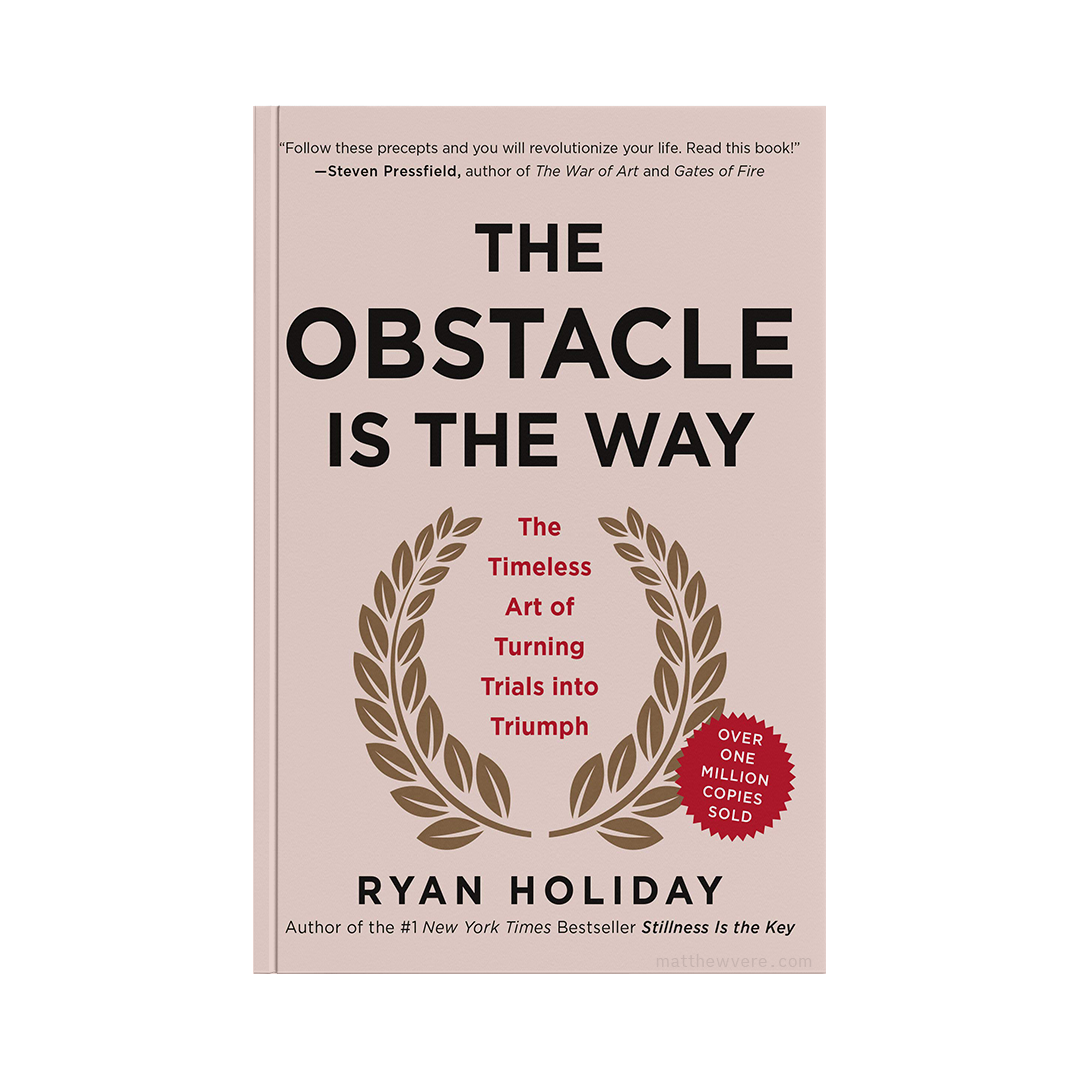 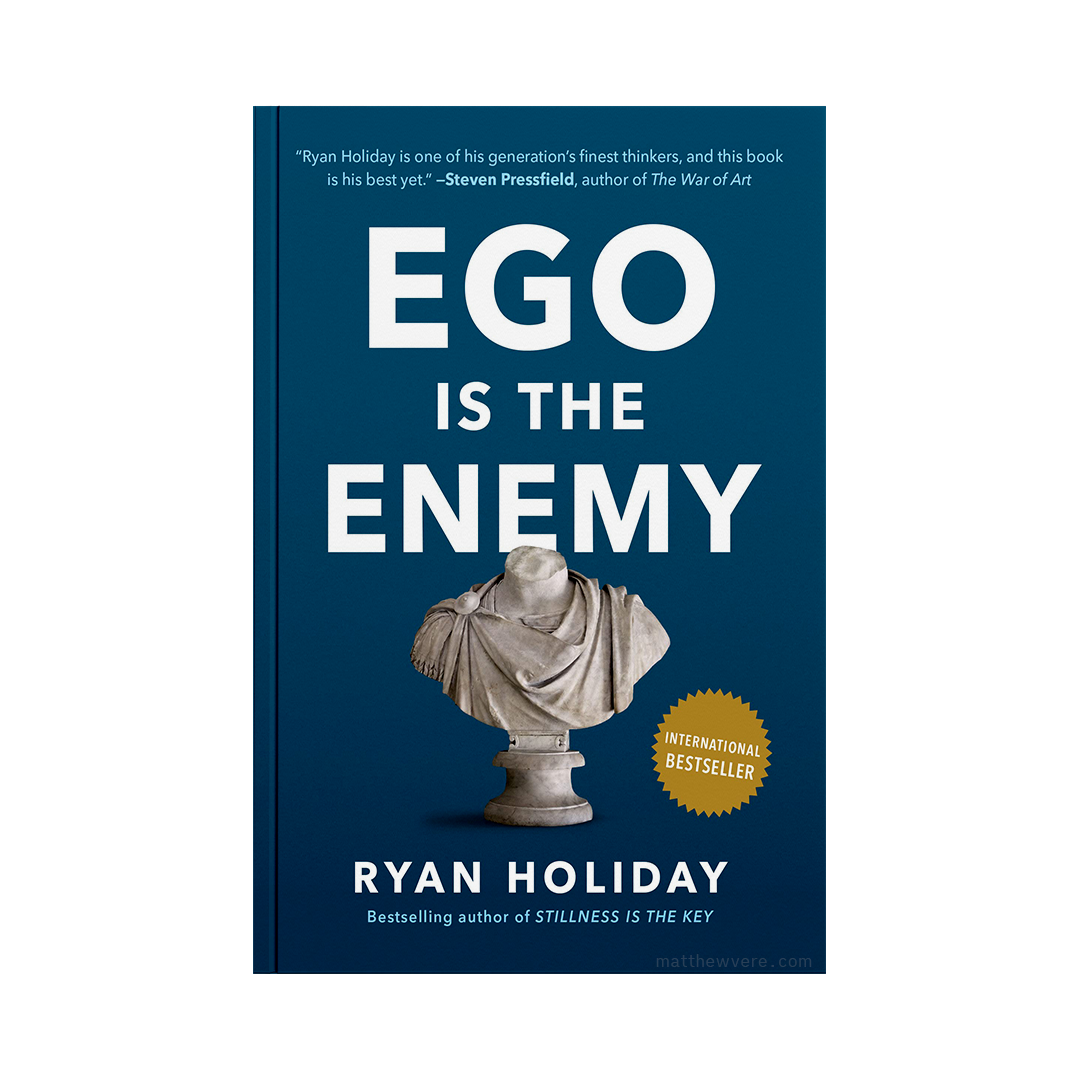 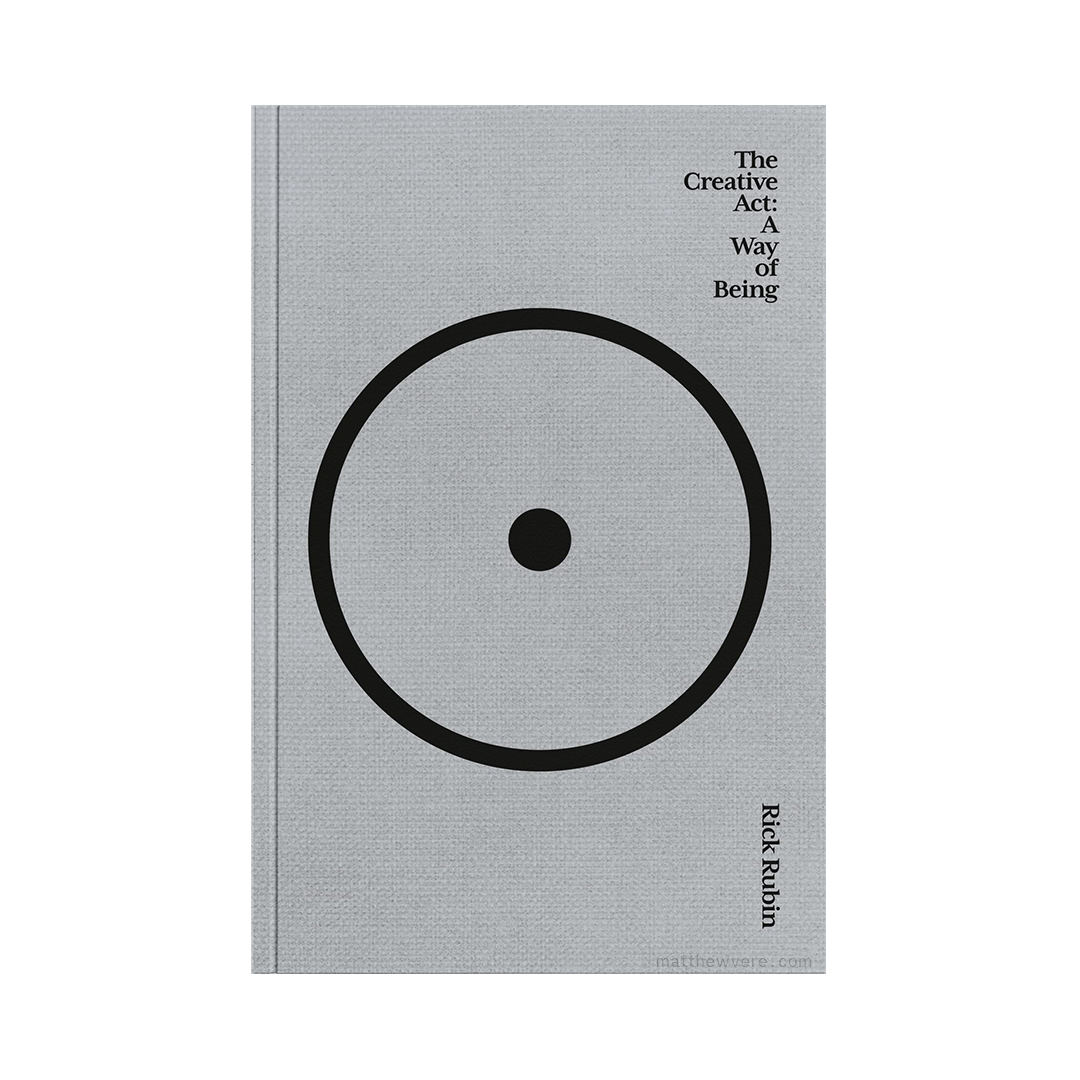